Thomas Wyatt may well be regarded as the unsung hero of the healing movement as he remains to this day one of the least known and least documented healing evangelists. 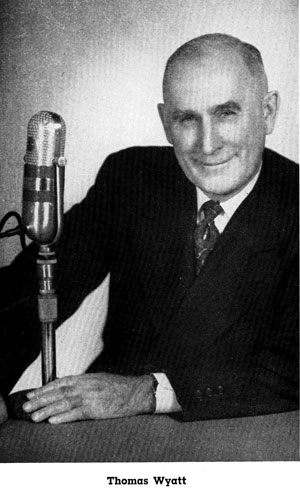 In truth his ministry preceded all of the major healing ministries and outlasted all but a few. He received the baptism in the Holy Spirit in the 1930's and immediately launched a ministry of pioneer evangelism. After a spell in local church ministry in Portland he pioneered a radio ministry called 'Wings of Healing' which propogated the message of faith and healing. So successful was this ministry that by 1954 he could say, 'Thousands of heathen have been saved and healed in the past year through this ministry of faith!'

In 1948 he predicted the coming of a great revival which came in full force the following year. He was able to aid early healing evangelists like William Branham. His already legendary ministry of evangelism, healing, faith and missionary endeavour became a spur to hundreds of young preachers across the US.

Later, he was prominent in the genesis of the Latter Rain Movement and became a major exponent of its teachings.

He wrote a number of very insightful books includung:
Commanding Power
Give me this Mountain
Keys to the Kingdom
Manna on the Ground
The Flaming Sword
The Work of Demons
Then Jesus Came
Thunder Before Dawn
Wings of Healing


Three books written with Raymond Hoekstra:
How to Receive the Gift of the Holy Spirit by the Laying on of Hands
The Ascension Gift Ministries
The Latter Rain


Two books about Wyatt:
Man of Vision
Grappling with Destiny, a biography by Basil Miller