The Voice of Healing was created to specifically to promote William Branham’s ministry. To Gordon Lindsay’s great surprise Branham announced that he "would not continue on the field more than a few weeks more." The third issue of the magazine, in June, 1948, quoted that ‘Because of physical exhaustion from praying for tens of thousands of people, Brother Branham finds it necessary to postpone the Canadian meetings. Pray that God will renew his strength. Beginning June 1st we shall be with Rev. William Freeman in a great tent meeting in Salinas, California. Brother Freeman just concluded a great healing campaign in Grants Pass, Oregon, in which many deaf, dumb, and blind were healed. Pray for us.’ This began William Freemans rise to national fame. 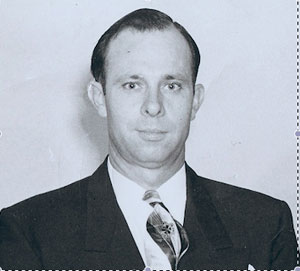 William Freeman had been holding meetings in small churches with considerable success. Lindsay visited one of his campaigns and with the departure of Branham from the scene, he immediately felt it was the will of God to major on other young healing ministries, like William Freeman. A series of meetings were planned and reported in the magazine through 1948. Many authentic miracles of the Freeman campaigns were reported.

Freeman came from an economically disadvantaged background but his spiritual roots were deep and intensely spiritual. Born in a log cabin in Stone County, Missouri, Freeman received visitations from God while still a boy. His early ministry was very modest and unrewarding. Times were hard and for twelve years he lived in the poverty of a Pentecostal pastor and evangelist. By 1946 his wife had a nervous breakdown and a heart problem caused him to resign from his pastorate in Porterville. He sought the Lord much, often praying until late into the night and he was given vision.

“In the vision I saw the Lord standing on a great cloud. As I watched Him the scene seemed to change, and I was standing before a vast congregation.” In 1947 he once again took to the field as an independent revivalist. At first, Freeman attracted little attention.

But Freeman's ministry was accompanied by "amazing miracles, signs and wonders" and word began to spread throughout the world of this 'unusual preacher with the gifts of healing.' Freeman's fame reached the ears of Gordon Lindsay, and when William Branham left the field in 1947, Lindsay visited the California evangelist: 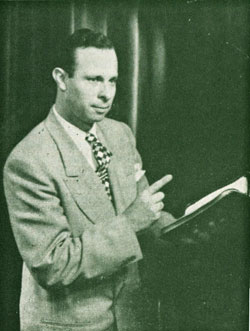 Beginning in 1948 Lindsay featured Freeman in The Voice of Healing as he conducted a series of large campaigns on the West Coast and the Midwest.

Freeman's ministry developed as rapidly as that of any other revivalist. For a time William Freeman surged near to the front of the revival, attracting huge crowds and launching the revival into the cities of the Midwest. In St. Louis and Chicago in 1953 Freeman listed 62,500 converts. In 1949, he began publishing his own magazine, ‘The Healing Messenger’. Where he listed “four steps to healing” -- (1) Stand on the atonement, trusting that with Jesus’ stripes we are healed. (2) Know that it is God’s perfect will to heal you. (3) Understand that sickness is the devil’s oppression. (4) Set the time of your deliverance.

In 1950, Freeman took a large evangelistic party on a campaign to Scandinavia. By 1952 he claimed the largest tent in the world - a much coveted prize amongst the healing revivalists.

Freeman's was a great preacher who faithfully expounded the Word of God from his pulpit, with fluency and power.
Nevertheless, as the revival began to wane in the late 1950’s Freeman's ministry declined with it.

In 1956, Freeman was still on sixteen radio stations and was planning a trip abroad for the next year, but the financial burdens of his ministry were obviously great. In an appeal to his readers he announced that he would discontinue publication of The Healing Messenger because of flagging financial support and rising costs. Shortly thereafter, he retired from regular evangelistic work and settled in Chicago. According to one contemporary, Freeman remained a popular preacher, but he limited his ministry largely to the Chicago area.

Bibliography: D. Harrell, Jr., All Things Are Possible (1975); Various articles in the Voice of Healing Magazine.